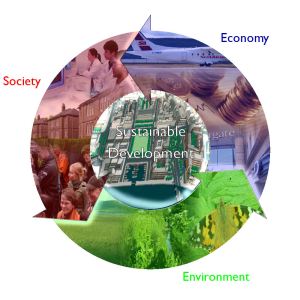 U.N. Secretary-General Ban Ki-moon said on Wednesday the international community had five imperatives to shape the future world, with the «first and greatest» being sustainable development.

The secretary-general was presenting his report to open the annual general debate of the 193-nation U.N. General Assembly.

«I would like to share with you my perspective on the way ahead,» Ban said. «As I see it, we have five imperatives — five generational opportunities to shape the world of tomorrow by the decisions we make today.»

«The first and greatest of these is sustainable development — the imperative of the 21st century,» he said. «Saving our planet, lifting people out of poverty, advancing economic growth — these are one and the same fight.»

The other four imperatives were to prevent the violation of human rights, build a safer and more secure world, support nations in transition, and to work with and for women and young people.

Ban said sustainable development was essential because it affected a wide variety of policy areas and could help lift people out of poverty.

«We must connect the dots between climate change, water scarcity, energy shortages, global health, food crises, and women’s empowerment,» he said. «Solutions to one problem must be solutions for all.»

The international community will gather in Rio de Janiero from June 4-6 2012 for the U.N. Conference on Sustainable Development (Rio+20). Ban said that this conference «must succeed.»

He also called on the leaders gathered at the General Assembly plenary to make progress on fighting climate change.

«Today, I call on you to reach a binding climate change agreement — an agreement with more ambitious national and global emissions targets,» he said. «And we need action on the ground, now — on cutting emissions and on adaptation.»

A binding global climate change treaty has not yet been agreed upon, but a conference in Durban, South Africa from Nov. 28-Dec. 9 will present officials from around the world with another chance to create one.

Ban also called for a new generation of sustainable development goals, as the current set of objectives, the Millennium Development Goals (MDGs), were due to be completed by 2015.

In discussing the imperative of building a safer and more secure world, Ban voiced his views on one of the most prominent issues due to be discussed at this year’s general debate, Palestine’s bid for U.N. member statehood.

«In the Middle East, we must break the stalemate,» said the secretary-general. «We have long agreed that Palestinians deserve a state. Israel needs security. Both want peace. We pledge our unrelenting efforts to help achieve that peace through a negotiated settlement.»

Aside from his stated imperatives for a better future, Ban commented on the need for the U.N. to adapt to a more austere time due to the global economic downturn. He said the U.N. must streamline its budgeting processes and build a more mobile and flexible workforce.

However, he said, U.N. member states must continue doing their part to support the global organization.

«Today, I ask governments that have traditionally borne the lion’s share of the cost to not flag in their generosity,» he said. «Budgets are tight. Yet we also know that investing through the U.N. is smart policy. Burden-sharing makes the load lighter. Scaling back is no answer.»

Ban concluded his speech by saying «the United Nations is the answer,» to many of global problems.

«Seven billion now look to us — the world’s leaders,» he said. «They need solutions. They demand leadership. They want us to act.»