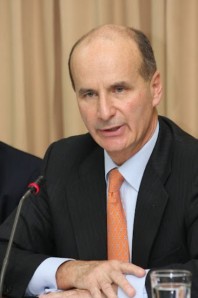 In order to talk with and get to know the concerns of Nicoyans, the former president of the republic, José María Figueres Olsen, showed up in the Coopealianza auditorium in downtown Nicoya on July 24.

Figueres, now 58 years old, was president of Costa Rica from 1994 to 1998, distinguished as the youngest head of state of Central America in modern times at age 39. In addition to his political career, he is also a businessman and international expert on sustainable development and technology.

About 20 people showed up for the discussion, and Figueres listened attentively to the requests and concerns expressed by the audience. The main requests made to the businessman concerned the lack of employment in the county and the high production costs of local farmers, among others. END_OF_DOCUMENT_TOKEN_TO_BE_REPLACED