Today is Earth Day, and the leagues are using the opportunity to show off some of their new sustainability initiatives. We took a look at what some sports leaders are doing to be more environmentally-conscious this year.
NASCAR 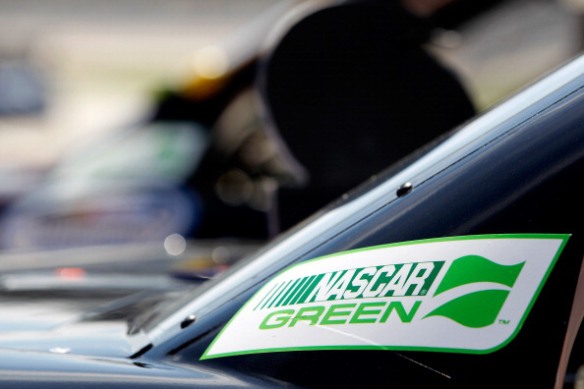 What they’re doing: The sport that appears to be the least green friendly is in fact enacting some impressive green initiatives:

Their Race to Green™ program calls for fans and industry players to donate trees to be planted, and according to its website, “NASCAR has the largest recycling and tree planting programs in sports; has put more than five million miles on Sunoco Green E15, a biofuel blended with 15 percent American-made ethanol from American-grown corn; and has the largest renewable energy program in the world, among sports properties.”

Impractical ways they could become more sustainable: Switch to carpooling.

What they’re doing: Since the the playoffs are in full swing, the NBA got a jump on their sustainability efforts and had their Green Week two whole weeks ago (overachievers). Most notably, they pledged to offset the entire amount of energy emissions used during all 67 NBA games during Green Week, which works out to savings of over ten million pounds of CO2. Not too shabby. They’re also holding a contest for fans who recycle their cell phones, outfitting players with organic cotton gear, and launched an online tool that allows teams and venues to track their environmental impact. Not to mention, six arenas are LEED-certified and five are powered by solar panels.

Impractical ways they could become more sustainable: Save electricity by playing glow in the dark games.

What they’re doing: As a sport that relies heavily on pristine natural locations, it’s in golf’s best interest to be green all year long. So while they don’t have any specific plans for Earth Day, Ty Votaw of the PGA Tour sat down with the Golf channel to talk about the green initiatives they take all year. The Deutsche Bank Championship was the first tournament to be carbon-neutral all the way back in 2008, and the Allianz Championship composts waste from the golf course to be used as fertilizer. In addition, 15 of the PGA Tour’s clubs are certified as Audubon Cooperative Sanctuaries.

Impractical ways they could become more sustainable: Reduce courses to one hole that you play 18 times.

What they’re doing: While the NFL isn’t doing anything special for Earth Day this year, their teams are taking part in the sustainable festivities. The Eagles helped clean up FDR Park and the Ravens are planting trees. Remember too that this year’s Super Bowl was the greenest ever, and they enacted some pretty big green initiatives in 2011. And to find out how the NFL could get greener, check out this piece for Forbes by former Atlanta Falcons fullback Ovie Mughelli.

Impractical ways they could become more sustainable: Turn off some lights (again).

What they’re doing: Like the NBA, Major League Baseball is developing a software program to track energy expenditure at stadiums and develop strategies to reduce their impact. Some Earth Day activities for different teams include a the Poland Spring Green Team (a group of volunteers that collects recyclables from the stands) at Fenway Park, in-game videos with recycling tips from the White Sox, and a Zero-Waste Game hosted by the Seattle Mariners, which will feature 100 percent compostable plates and flatware. You can check out the full list of ballpark initiatives here. Not to mention, the organization Players for the Planet was founded by former MLB players to promote green initiatives for teams and the communities that surround them.

The Red Sox will have Gina McCarthy of the EPA and Energy Secretary Ernest Moniz throw out the first pitch on Tuesday evening. If it feels particularly warm in the stadium, it will be because Ernie is bringing the heat:

Impractical ways they could become more sustainable: Plant trees in the outfield.

What they’re doing: Since many NHL teams share an arena with NBA teams, they benefit from similar sustainability efforts. The NHL has been making environmental headway since 2011, and with multiple LEED-certified arenas and a website devoted to their green efforts, they’re quickly becoming one of the world’s most sustainable sports. The Sharks are the first team to use fuel cell technology as a supplemental electricity source (replacing 90 percent of the electrical utility power during non-event hours) and have a strong composting and recycling program. Tonight, the Sharks will play the Kings, a similarly environmentally-conscious team. The Staples Center employs solar panels, high-efficiency electronics and energy management systems to curb its carbon footprint.

Impractical ways they could become more sustainable: Raise the temperature on the ice.

What they’re doing: This is probably the most unique effort by a league to help the planet. MLS is now teaming up with the SOCCKET — a soccer ball that functions as an eco-friendly portable generator. According to the product’s website:

It captures the natural energy from playing soccer and stores it for later use. Just 30 minutes of play provides hours of light for a family in need. This innovative tool improves the lives of children by providing a sustainable, portable, and fun source of energy. It facilitates learning and promotes healthy mental and physical development.
The SOCCKET currently lights homes in Mexico and the United States, with large pilot programs in Nigeria, Brazil, and South Africa. SOCCKETs are scheduled for distribution to Benin, Costa Rica, El Salvador, Haiti, Honduras and Nicaragua.
How cool is that?! Not only does it help provide cleaner electricity, it’s also going towards families and hospitals who would otherwise have to live without it.