At Fortune’s Brainstorm Green conference on Tuesday, Apple VP of Environmental Initiatives Lisa Jackson went in-depth on the company’s multiple green projects and fielded questions, including one regarding the industry-wide problem of reducing a firm’s carbon footprint while growing as a business. 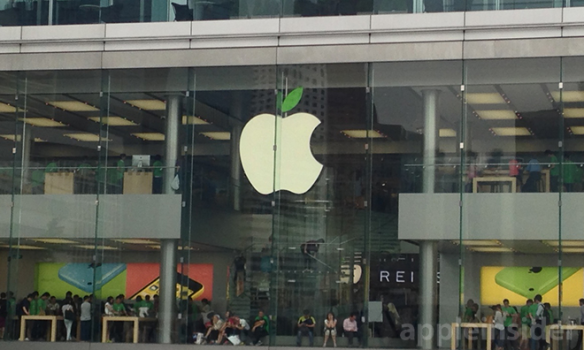 Flagship Apple Store at Hong Kong’s International Finance Centre. | Source: AppleInsider staff photo
As seen in a video of the talk, made available as part of Fortune’s Brainstorm Green 2014, Jackson was asked by her counterpart at Patagonia, Rick Ridgeway, to offer thoughts on how Apple’s incremental advances in carbon footprint on a per-product basis are being overshadowed by an overall rise as a company.

Specifically, Ridgeway noted Apple’s success in reducing the carbon footprint of its Mac business by 27 percent over the past eight years. That figure, and improvements in other products, is displaced when compared to the growth of the company’s overall carbon footprint over the same time period.

The question is one that many successful companies in a wide variety of industries deal with as their business grows and more products sell. It’s something Ridgeway and his team at Patagonia, which is dealing with the same issue, refers to as «the elephant in the room.»

«Listen, if all of us sustainability professionals have to resort to ‘make and sell less stuff’ as the answer to the problem, then we are suffering from an extraordinary lack of imagination. And innovation,» Jackson said. «One of the things that your company — certainly I think Apple — is about is trying to understand where the technology innovations and other innovations are that help us to reduce carbon intensity. We’re not advocating for less people to have access to our products. That’s not the answer we’re looking for. What we’re looking for is understanding the whole puzzle.»

The former EPA chief went on to say that Apple is building alternative ways to deal with its overall carbon footprint, like a recycling program that collects «well over 80 percent» of product amount by weight that the company put out seven years ago. Jackson pointed out that the size of Apple’s products has decreased over successive generations, suggesting a good incoming mix.

Jackson also went over Apple’s ongoing clean energy initiatives, which include an expansion of renewable energy from data centers to retail stores. Green energy in retail was among the many programs and environmental impact issues detailed in Apple’s wide-reaching eco-friendly campaign that debuted on Earth Day in April.

Currently, 100 percent of Apple’s data centers are run off renewable energy sources, as are 94 percent of its corporate structures. Jackson said the company is now shooting for 100 percent green energy in retail, but did not elaborate on the topic.