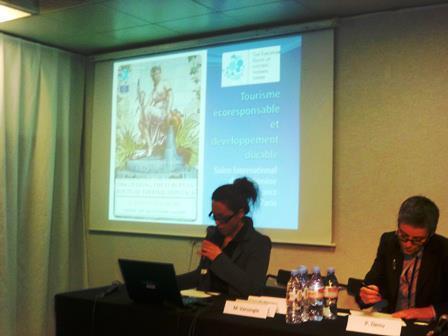 The Regulations of the « Cultural Routes of the Council of Europe » underline more than once the importance of sustainibility for their impletation: “the theme must permit the development of initiatives and exemplary and innovative projects in the field of cultural tourism and sustainable cultural development” (List of eligibility criteria for themes ) or in the List of priority fields of action: “…concern themselves, in the field of cultural tourism, with raising public awareness, drawing decision makers’ attention to the necessity of protecting heritage as part of sustainable development of the territory and seek to diversify both supply and demand, with a view to fostering the development of quality tourism with a European dimension.”.

The European Route of Historic Thermal Towns is particularly aware of these demands, inasmuch as the quality of the water has, since the origins of thermal activity in the times of the Celts and the Romans, constituted not only a demand for, but also a symbol of, purity, health, well-being and even spirituality. This objective of quality is obviously linked to the protection of the environment in which the sources are born. Making thermal water available thus constitutes an essential aspect of water’s veritable Odyssey through the planet. The sharing of natural resources, the sense of common responsibility towards health, as well as the promotion of values such as well-being, but also all the values associated with promoting historical heritage and with the spirit of dialogue: all these became traditions when modern spa activities, linked to the birth of modern tourism, was created. It is therefore not surprising that a notion such as “integrated conservation”, promoted by the Council of Europe, would be a natural part of the policies of thermal towns in the continuation of the “Orientations for legislation development and system management for cultural heritage” defined by the same institution.

The sustainable development of a thermal town is these days in fact based on several major complimentary principles of economic development:

– social balance and the implementation of an inclusive well-being policy as much for visitors as inhabitants;

– protection of the environment (which incorporates natural and cultural heritage) in a perspective of responsibility and partnership between the public and private sectors of thermal activity and tourism.

– The promotion of cultural tourism integrating the development and enhancement of a considerable and diversified tangible heritage and an intangible heritage which takes benefit for its comprehension of new approaches and interpretation techniques via transmedia.

In the framework of this encounter, we chose to put forth two axes of analysis led by the EHTTA:

For balanced tourism as well as harmonious development

Sustainable development has too often become a refuge expression used for reassurance in the face of a global crisis. The report, which is based on the protection/development/transmission trilogy, tends to rely too heavily on the heritage cult concept. This narcissistic attitude facing heritage denounces Françoise Choay to characterise the dangers of global “success” for heritage as a place for tourist or leisure investment.

This reflection has thus led towns to insist upon the necessary balance between making architecture and architectural innovation a part of heritage, in close connection with the public and private sectors (medical or recreational thermal establishments and tourist services)as well as between making heritage more intangible via digitisation, and placing the visitor or mediator’s body in the living architecture of a cultural tourism that experts today tend to name multi-sensorial and participatory tourism. Heritage is, economically and symbolically, a non-renewable resource that must be protected, conserved and valued. Thermal tourist experience is in this sense particularly suited for making visitors perfectly aware of a patrimonial continuity connecting the environment, the cultural landscape, knowledge of the architecture or “Baukultur”, and the human dimension represented by all the historic figures who inaugurated the Grand Tour, cultural tourism’s predecessor.

As such, it is about developing the liaison between the well-being of culture and the culture of well-being. At the same time, the importance of “consumable” heritage, in terms of the knowledge of artisans linked to the historic importance of “souvenirs” offered to tourists (spa “jolités” – painted wooden boxes, Royat crystal jewellery, lithographic posters…) or of gastronomy, deserves reconsideration in the framework of a new regional tourism promoting local production.

Working in the framework of a European towns network that has always been made up of meeting places and those of dialogue leads us to participate in an obvious and natural fashion in another aspect of sustainability: openness towards other cultures and encouraging the active participation of visitors, two concepts promoted by the cultural routes, coming through the presentation of heritage in European terms.

Peter Wagner, in the work “Forward Planning: Functions of cultural heritage in a changing Europe” (2001) suggests: “That which potentially unites Europeans must clearly be sought in terms of the “absent” or “marginalized” values in European history. “Heritage” therefore can be defined as those “core values” which can be constructed as a Europeanised narrative of European history; a counter-narrative to the presently existing national (that is, nationalized) histories.”

Kate Clark and Paul Drury, to whom was given the task of identifying the overall trends in terms of cultural heritage management (in the large sense), added to the traditional concept of interpretation – which emanated from specialists – the new concept of an interpretation emanating from the community. “Heritage is an opportunity to explore and to articulate a European narrative, in effect to Europeanise European history. Especially under present conditions, there is a need for a new reading of the past which tells the story of European heritage at a level that transcends national boundaries, and at the same time articulates the contributions of national, regional and local identities to the construction of a common European home”.

It is through this narration of the travels and encounters of a series of creators – painters, writers, musicians, scientists and political decision-makers – who frequented, and still frequent these thermal towns, and a call for the diaries of today’s creators, that the thermal towns can respond as a cultural route to such wishes with intangible heritage specific to them.